skip to main | skip to sidebar

Trade with rooster1 (from the Bench)

Added these Mickey Mantle cards in a trade with rooster1 sending him some Ken Griffey, Jr. cards for his collection. Included 1996 Bowman #M20, 2006 Topps Chrome Black Refractor #7 and 2002 UD Piece of History #38. 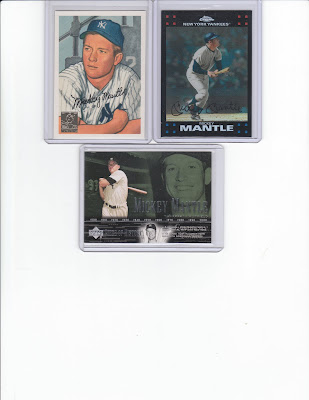 Trade with Steve1972 (from the Bench)

I added a much sought after 1999 Pacific Prism Derek Jeter to my collection with a trade with Steve from the Bench. I sent him some 1994 Leaf cards for his set. The 1999 Prism set included 150 cards. Key cards besides Jeter include Cal Ripken, Alex Rodriguez, Mark McGwire, Ken Griffey, Jr., Barry Bonds, Roger Clemens and Mike Piazza. 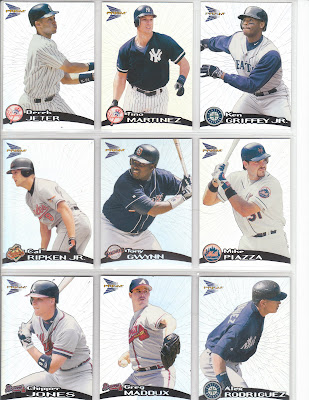 Posted by NYBBNUT at 8:09 PM No comments:

Only beef in these Jimmy Dean sausages! Shown here is from a trade (2nd) with Rhubarb_Runner of http://mmmrhubarb.wordpress.com/baseball-cards/
I sent him some Twins from Pacific sets that he needed. He is a terrific Twins fan and collector so contact him if you want to trade. 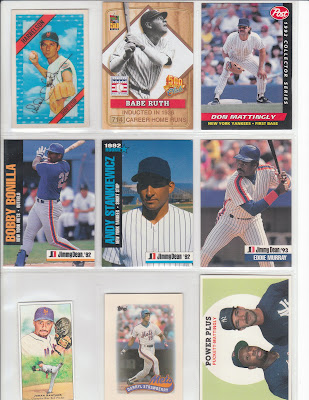 Posted by NYBBNUT at 9:28 AM No comments:

10 Interesting Rod Carew Facts:
1. Carew collected his 3,000th career hit (a single off Frank Viola) on August 4, 1984 - the same day that Tom Seaver won his 300th career game.
2. Alan Bannister called Carew "the only player who can go 4-for-3".
3. He was the best bunter of his generation, and he stole home 17 times.
4. Toiling for the poor Twins teams and the hard-luck Angels, Carew collected more hits than any player who never played in a World Series.
5. Rodney Cline Carew was named after Dr. Rodney Cline, who delivered baby Carew while on a train in the Panama Canal Zone, on October 1, 1945.
6. Born in the Panama Canal Zone, he learned to hit tennis balls and wads of paper taped into balls.
7. When he was 16 his mother took the family to New York City to live with Rod's godmother.
8. Carew grew up not far from the old Polo Grounds, and near Yankee Stadium.
9. In 1976 his string of four straight batting titles was halted when he lost the crown on the final day of the season to George Brett.
10. In 1977, faced with the overwhelming evidence that his six-time batting champ was the best hitter in baseball, notorious cheapskate Twin's owner Calvin Griffith voluntarily gave Carew a $100,000 bonus! 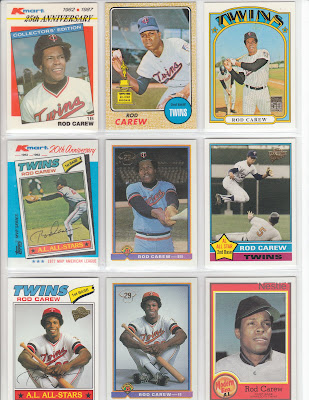 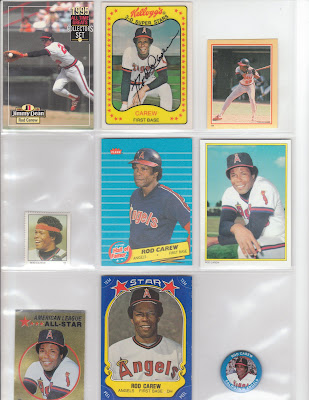 These are some of the Rod Carew items I own. If you have any for trade please contact me.
Posted by NYBBNUT at 6:41 PM No comments:

Time for hot stove to start as players renegotiate their contracts. Here are the top 2011 potential free agents if their teams don't resign them in the next few days. Expect most to test the free market. They are:
1. Joe Mauer
2. Cliff Lee
3. Brandon Webb
4. Derek Jeter
5. Carl Crawford
6. Jason Werth
7. Victor Martinez
8. Josh Beckett
9.Carlos Pena
10. Adam Dunn
Posted by NYBBNUT at 6:49 AM No comments: 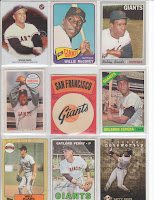 This is a tribute to some of the great Giant players that came close, but never got to realize a world championship since the Giants moved to San Francisco (check out Sully Baseball for a blog listing additional great Giants from past years). My dad was a dedicated Giants fan and followed them after their move to the coast until he passed away in the early 70's. Even to this day, I still have painful memories of the 1962 World Series. From my San Francisco Giants collection, clockwise from the upper left, 2002 Topps Pristine #141 Willie 'Say Hey' Mays, 1965 Topps #176 Willie 'Stretch' McCovey, 1970 Topps #425 Bobby Bonds, 1966 Topps #132 Orlando 'Baby Bull' Cepeda, 2001 Topps Noteworthy #TN7 Barry Bonds, 1967 Topps #320 Gaylord Perry, 1987 Topps #420 Will 'The Thrill' Clark, 1970 Kelloggs #13 Juan Marichal, the logo in the center is a 1974 or 1975 Fleer cloth logo sticker (according to The Fleer Sticker Project).
Congratulations to Edgar Renteria, Tim Lincecum and the rest of the 2010 San Francisco Giants!!!
Posted by NYBBNUT at 7:18 AM No comments:

Recent trades help me add these Stadium Club cards from the 2008 set. I was never really interested in the entire set, but I find the photography of the retired players subset very interesting. I recently received the Roberto Clemente card from a fellow collector, K.C._Royals on The Bench to add to the Mantle card. The entire subset includes: 91 Jackie Robinson, 92 Mickey Mantle, 93 Ty Cobb, 94 Joe DiMaggio (cut-out *), 95 Honus Wagner, 96 Babe Ruth, 978 Nolan Ryan, 98 Roberto Clemente, 99 Ted Williams, 100 Tom Seaver * the DiMaggio picture was removed when a contract was signed with Upper Deck. If anyone has any cards from the subset please contact me.

Posted by NYBBNUT at 9:44 AM No comments: